The Pontchartrain Basin, Atchafalaya Basin, and Barataria Basin are all contenders for the site of the NERR

The effort towards creating a National Estuarine Research Reserve (NERR) in Louisiana is being hosted by LSU Sea Grant, and by the National Oceanic and Atmospheric Administration (NOAA).  February saw the completion of nine town hall meetings by site selection committees across three regions of coastal Louisiana. These meetings in venues in the Atchafalaya, Barataria and Pontchartrain basins offered a combination of in-person and virtual gatherings to showcase candidate sites. The possible locations for a research reserve were introduced as macro-sites that offered a number of places within each basin that could provide physical facilities along with wetland and estuary “campuses” spread across many thousands of acres. A NERR uses existing state lands and public waters and takes advantage of existing state facilities. A newly nominated NERR in Louisiana will become part of a national network of reserves. 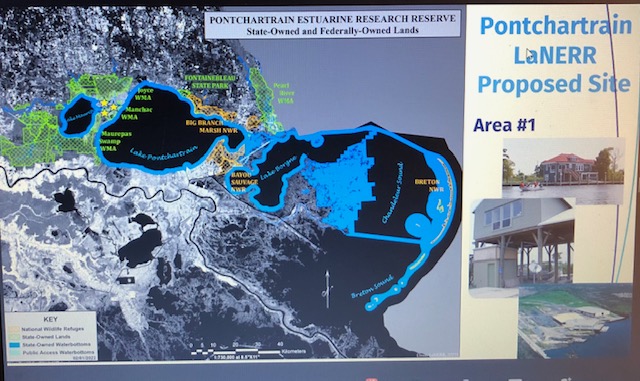 An estuarine research reserve in Louisiana would offer what twenty-nine others do in coastal states and around the Great Lakes: research, stewardship, education and training. Clearly, a NERR has many functions, including scientific monitoring with uniform sampling subjects and methods to produce long-term data sets that can be shared across the network. Sea Grant’s Dr. Robert Twilley touched on a central idea in his presentations: a NERR needs to be accessible to K-12 students in its surrounding service area so that it is able to provide one-day educational field trips as well as coordinated classroom science programs. Giving school groups a high-quality field experience is an important mission for a NERR in Louisiana, according to Twilley. For most school districts, overnight trips are out-of-reach luxuries due to budget, transportation and insurance limitations, so the K-12 educational programs offered by a NERR must operate within this day-trip constraint.

For each of the candidate basins, February’s town hall presentations covered the main features of each, with a focus on educational demographics.

The Pontchartrain Basin has 17 colleges and universities and 100,000 students within a 1 hour’s drive of five sub-areas ranging from Lake Maurepas across the north shore of Lake Pontchartrain and Big Branch NWR through the Pearl River swamps, Bayou Sauvage and Rigolets out to the Chandeleur Islands. Existing facilities at Manchac, Docville (Meraux, La.), Tulane University, and Fountainbleau State Park were highlighted as places for offices or teaching facilities.

The Atchafalaya Basin has 2.2 million people within 75 miles of the sites most likely to host NERR facilities, with 860 schools and 45,000 K-12 students. The Atchafalaya presentation cited 150 public boat launches and a continuum of habitats from the alluvial floodplain zone in the upper basin to the brackish coastal marshes at the lower end. There are black mangroves and submerged aquatic vegetation here, and the Atchafalaya River’s active Wax Lake delta is building new land by alluvial deposition in a state that otherwise suffers from long-term net land loss.

The Barataria Basin site selection committee’s PowerPoint presentation focused on the type of research a Louisiana NERR could do: marsh adaptation in the face of sea level rise, investigating factors affecting crab harvest, and seeking causes of oyster reef mortality. Barataria’s site committee identified facility locations: the closed LSU Ag Center citrus crop experiment station in Port Sulphur, and land adjacent to the Barataria Museum and Wetland Trace in Lafitte. The Barataria committee also cited possible visitor numbers for the NERR as a percentage of New Orleans tourism. Attracting 1% would provide almost 200,000 visitors a year. Their presentation cited the Grand Bay NERR near Pascagoula as an example of a nearby estuarine reserve’s physical facilities and programs. The Mississippi Department of Marine Resources sponsors the Grand Bay NERR, employs its staff, and provides offices, vehicles, boats and research equipment.

Dr. Twilley and other presenters stated that partnerships with local governments, school districts and non-governmental organizations will be important considerations as one of the three Louisiana sites is eventually selected for the state’s first NERR. A state agency will host, staff and operate Louisiana’s research reserve, although at the time of the February presentations, a single agency had not been determined. In June 2022, when a final location is selected among the three basins, Governor Edwards will send NOAA a letter which, when accepted, will trigger the development of a Draft Environmental Impact Statement for the reserve in compliance with federal law. Part of the annual funding for a NERR comes from NOAA and part comes from the state budget. There are annual competitive grants available to all 29 existing NERRs for site enhancements or facilities. The main NOAA budget for all National Estuarine Research Reserve facilities in 2021 was $33 million, with $28.5 million divided evenly among them – and $4.5 million for the competitive grants. A research reserve operates under existing state wildlife and environmental laws and does not usher in new regulations from NOAA or other federal agencies.

Louisiana is the only coastal state without a research reserve in the national NERR network. Each presenter, throughout the nine town hall meetings, was careful to point out that no matter where the NERR ends up being located, Louisiana wins. The Mississippi River Basin is the seventh largest on earth, and all three sub-basins, Atchafalaya, Barataria and Pontchartrain are within its overall delta and historical footprint. The swamps, marshes, and estuaries formed within the river’s active and ancient deltas define Louisiana and are world-class laboratories both for research and for educating the state’s school children about the rich, dynamic and challenging environment they inhabit.